We officially started them on solids yesterday. We are going to do Baby Led Weaning and follow the updated Canadian Pediatric guidelines mixed w a little from the American ones (even though I'm not Canadian. Although my Hubby is actually a dual citizen, as he grew up close to the Canadian border, but I digress. It's more for the scientific research behind it...more on that later...).

We are doing avocado first. We did try it once a few months ago but then thought it would be better to wait until they were 6 months (adjusted age) to ensure their tummies could handle eating solids. Since their 8 month B-day is in a few days and they have been showing signs of being ready, we decided today was the day to start.

It was a riot! 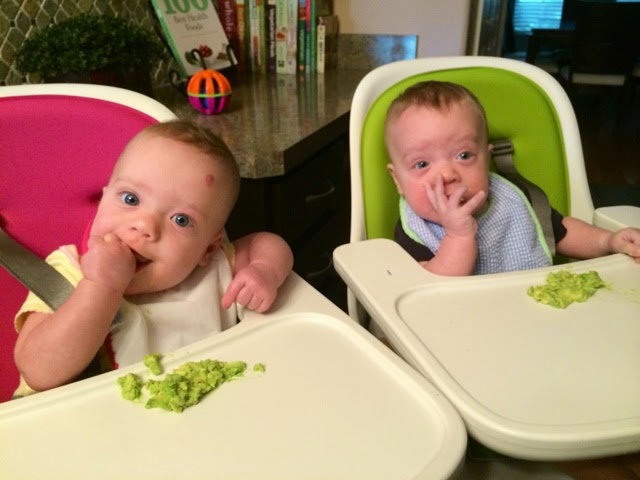 Riley was very serious about her food... 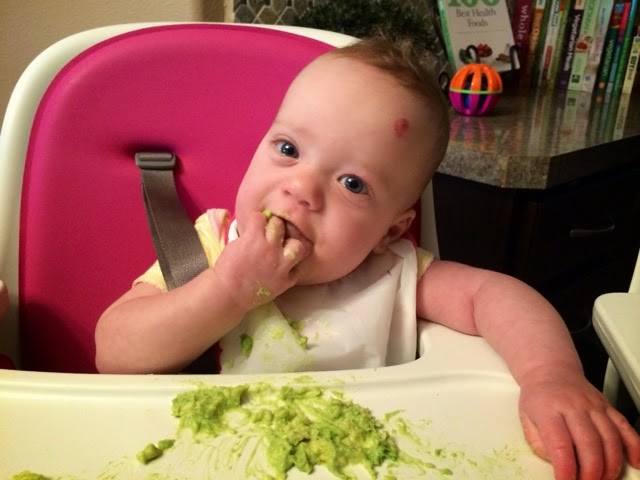 If she tries hard enough, maybe she'll get her ENTIRE fist in there... 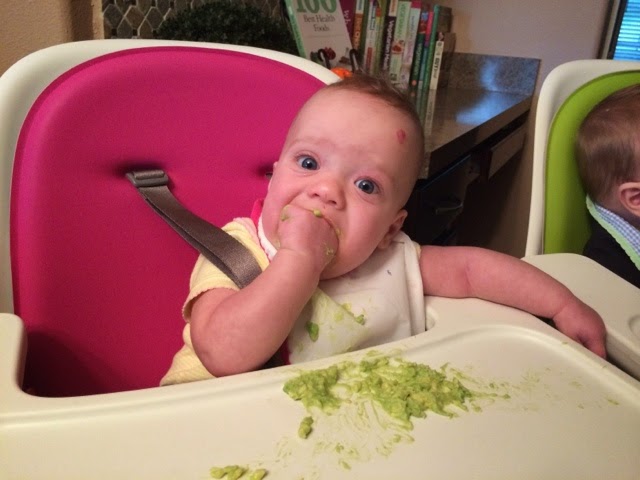 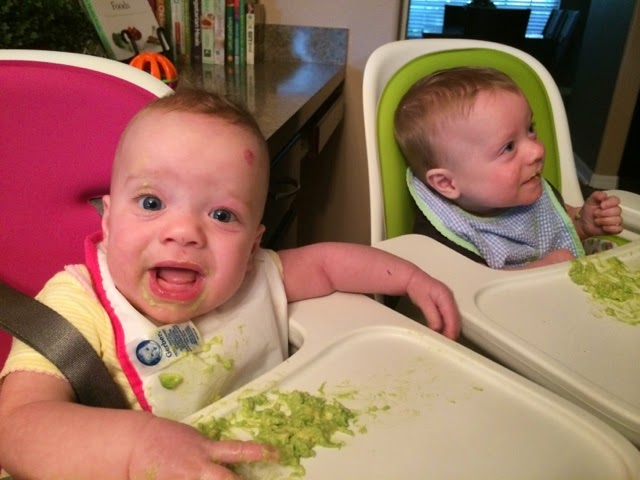 Like most things, Riv needed a little more coaxing before digging in... 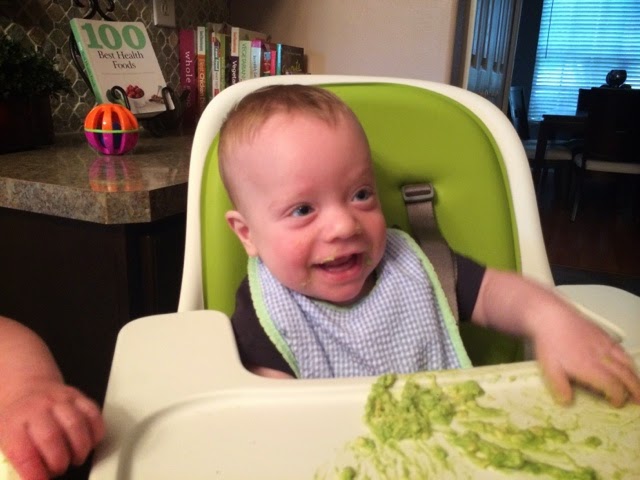 While his sister wasn't interested in using a spoon,
River was really into it! 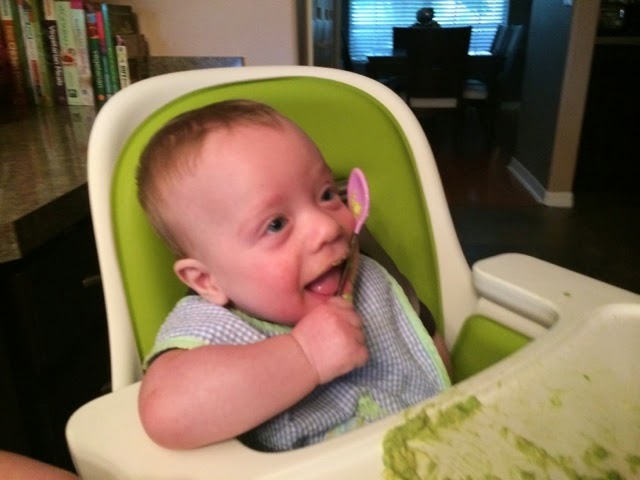 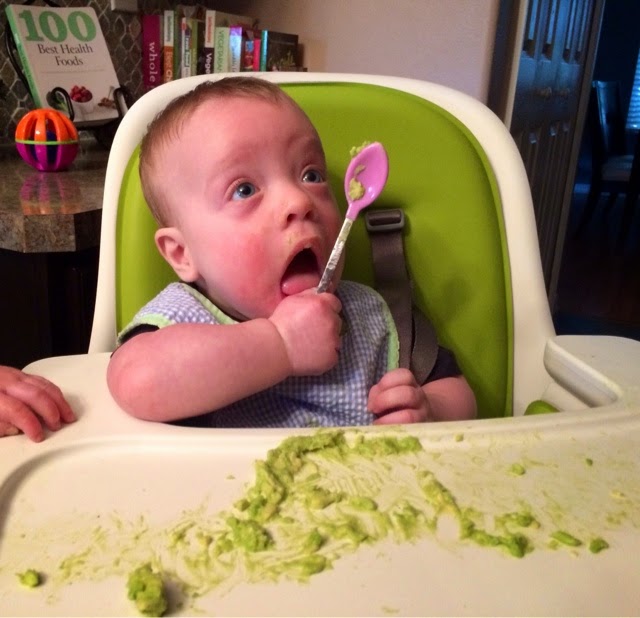 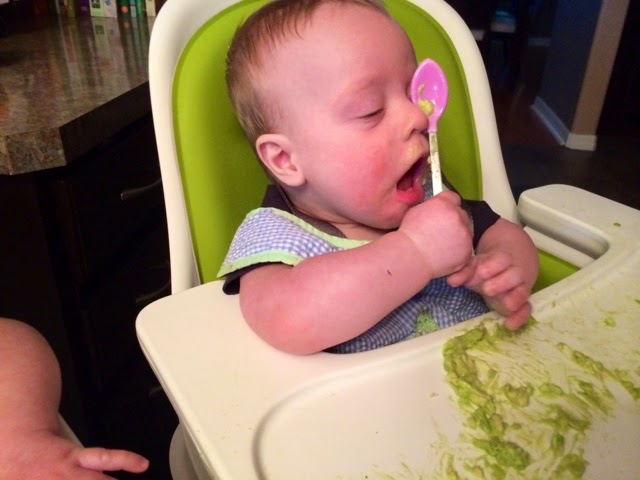 But he missed his mouth a bit... 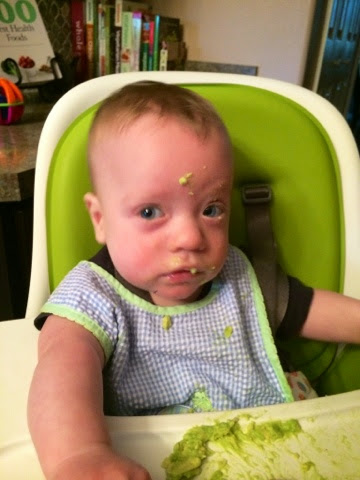 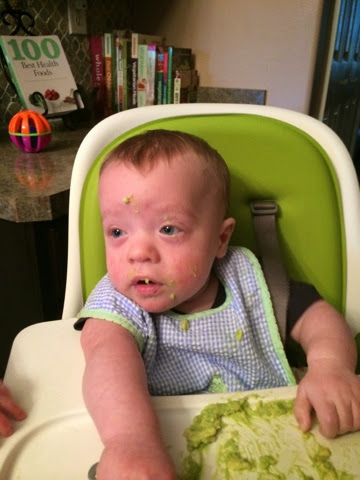 Then Riley wanted her brother's spoon, not her own in front of her, just his! LOL

The Twins First Time in the Pool

The twins went to the pool for the first time recently. My parents stayed over so they could babysit for a little while and then spend the next day with us for Father's Day. The plan was to get them ready and out the door after their morning feeding so we could get them outside early since we live in FL where it's Africa hot all the time. We took them to our community pool with their little SPF swim outfits and swim diapers on (that we got from Target). I had researched a ton of different swim floats to find the best ones that also provided shade. We wound up ordering two on Amazon that had the highest ratings and canopies over them to block the sun. One pink and one blue...

Link to Item on Amazon

I covered any exposed skin with nontoxic kids sunblock and had little sun hats on them. (Although I think I am going to look into getting long sleeve tops for next time). They are just SO pasty white I was paranoid the whole time about them getting burned. 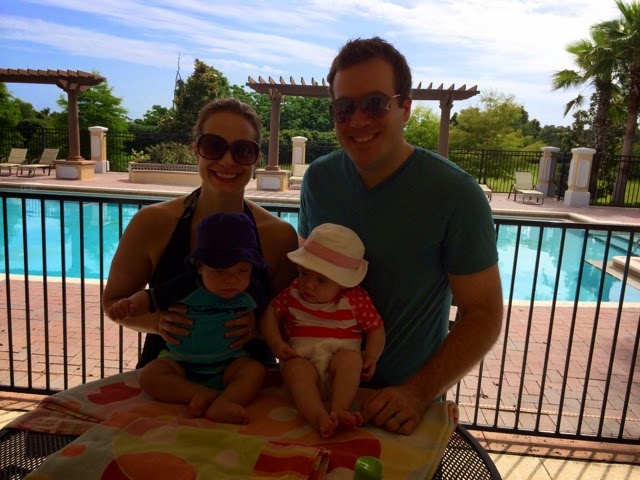 The pool was empty, which was awesome. We slowly carried them in the water, which was a little colder than I would have liked but not too bad, and carefully started dipping their legs in the water going a little further in each time. Once they were acclimated to the water we got them situated in their floats. 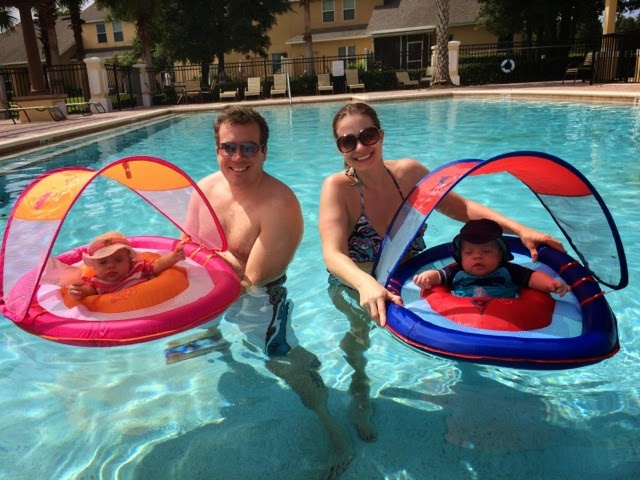 Riley was instantly all smiles. She kicked her feet underwater and splashed her hands. My dad would take his hand and splash the water in front of her and then she would mimic him and do the same. It was pretty amazing to watch. She absolutely loved it! 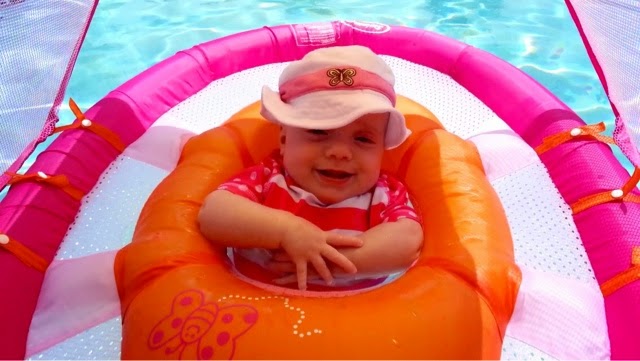 River was a bit more uneasy, as he is with most things. He didn't fuss much, but he looked a bit nervous and unsure about the whole thing at first. But when I grabbed hold of his legs under the water and started making fun noises and kicking his legs so he can see that it's safe and fun. Before long he was smiling and laughing and having a blast! 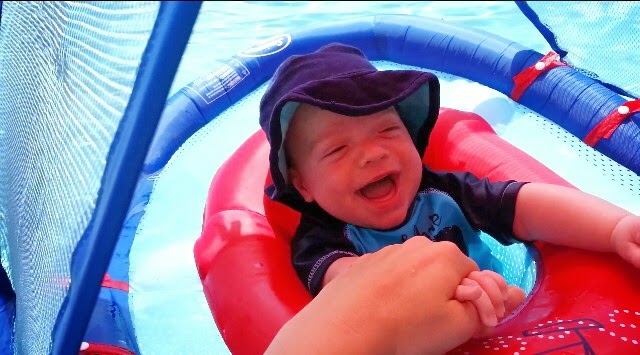 Click to See Video of the Twins' Adventure in the Pool

After a little while we took them out of the floats and held them in the water, swishing them around to give them a different experience. We only kept them in the pool for a half hour, as we didn't want to risk them getting a sunburn or shriveling up into a prune. We stripped off their bathing suits and put them in their car seats with just a dry diaper and before we even put the car in drive they were out like a light! 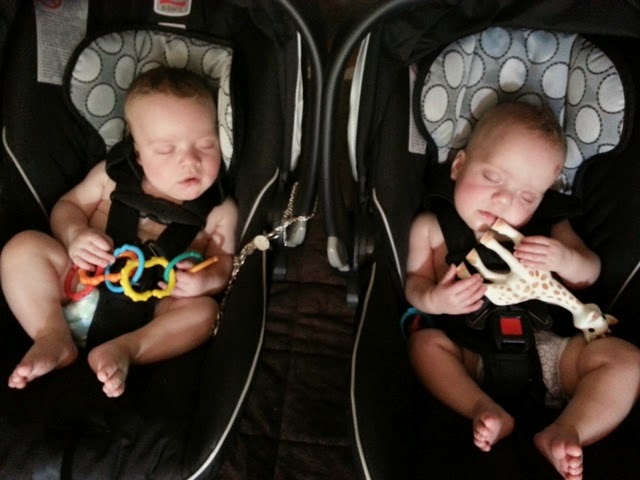 Looks like we have two little water bugs! Can't wait to take them again. I only wish I could do it more often but I'm not sure I could handle taking two babies myself during the week so we will have to wait for the weekends for now. Looking forward to our next trip to the pool!

Since we have been doing a lot of tummy time working on the babies' strength and trying to get them where they need to be developmentally, I went on a hunt for a better solution to laying a blanket down on the floor. We have activity mats, but I really wanted something that the twins could be on together. Earlier this week I found this awesome giant tummy time mat on Amazon (I buy just about everything from there). The mat is huge and has 8 different sensory things on it, wipes up clean super easy, and folds up with handles for travel which will definitely make visiting people a lot easier. Anytime I bring them to somebody's house I feel like I'm moving in! It's a pain to carry around the big activity mat with the dangling toys. This sucker folds up into a square that I can stick in a bag with their toys! Love it and the babies do too!! 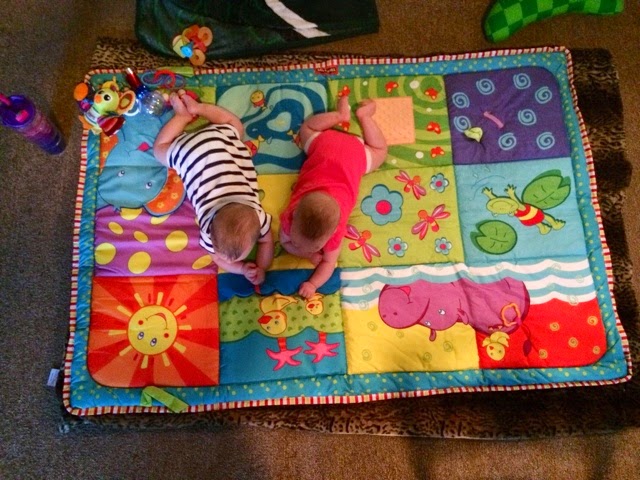 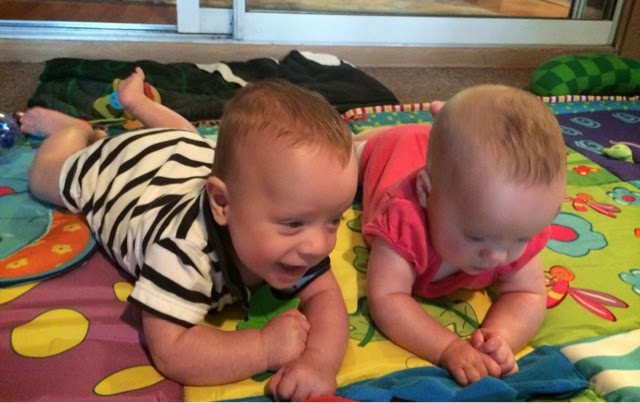 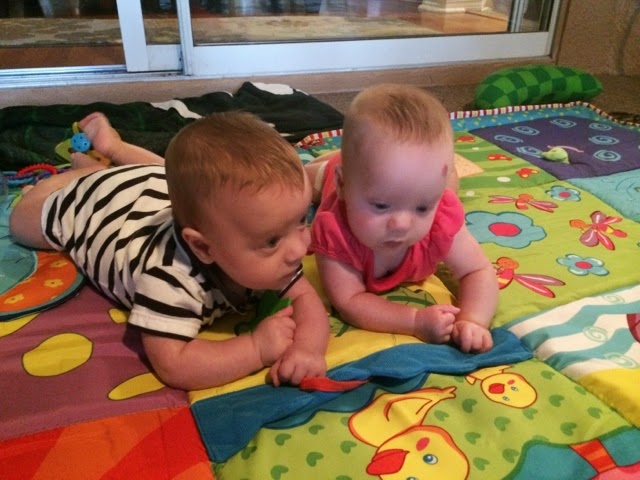 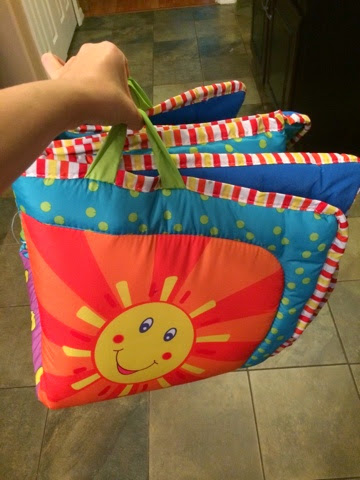 Back when I was pregnant and researching like crazy I had found out that walkers and exersaucers are bad for babies' development and can lead to hip dysplasia. So I began searching for options that were specifically created with that in mind and wouldn't hinder the twins' development in any way. That's when I came across the Jolly Jumper exerciser. It was scientifically designed similarly to a surgical support brace. So we opted to go with that one and really liked that it came with a stand instead of having to hang it from a doorway. Even though it is a better option than other jumper type contraptions, I still won't put the twins in it for any long periods of time. Just for like 10 minutes a day for them to have fun and burn off some energy...

This week I decided to check the box to see when we could start using it and saw it says: 3+months. That's now! That's past now!! So G immediately put it up in the living room. I am happy to say the twins LOVE it! I mean LOVE LOVE it. It took them a few (hilarious) tries to get it, and while they still haven't mastered it, they are definitely learning to bounce. And it is SO funny!! They both do slightly different things in it, but each have just as much fun in it! So glad we got this jumper. The only thing is... I think we're going to need two! Sure, right now it is fine that they take turns in it, but as they get a little bigger I think it would be so cool to have them bouncing next to each other. So perhaps I just want it for the cuteness factor of having them jump together, but so what. They are my biggest source of entertainment lately! LOL. Plus I love seeing them so happy and amazed when they are in it. 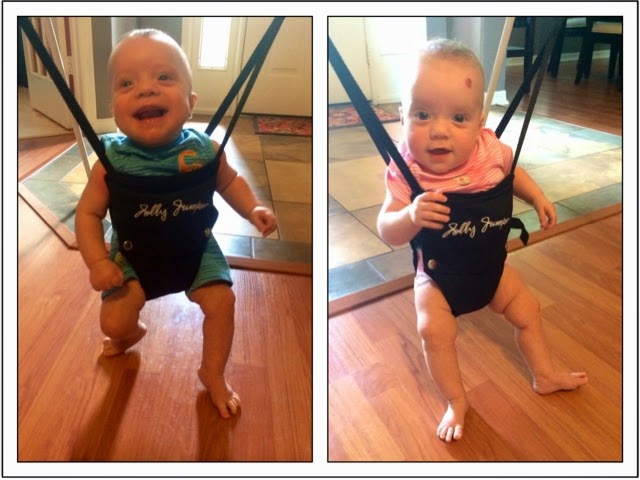 This was the twins first attempt at the jumper. They weren't quite sure what to do, but they sure had fun being in it! The funniest thing is when the video switches to Riley. Our laughing startles her and she jumps a few times, it's hilarious!


Riley looks like a wild west character the way her legs hang out. She is still getting the hang of it and gets better each day. Here she is sort of tap dancing rather than jumping!

A big Happy Birthday shout out to the Super Twins!! They are SEVEN months today!!! I can't believe it!

Sadly they had their shots today (and not the fun kind!). But they sure have grown this week. River is 14lbs 11.5oz and 25 inches long! Riley is 14lbs 8oz and 24.5 inches! They were so alert for their appointment, they were watching everything the doctor was doing and each other when it wasn't their turn. Riv kept flashing his usual charming smile and when the Dr went to turn Riley over she rolled herself and popped up on her elbows like she does for tummy time! Too cute. These two have quite the personalities. Can't wait to see how they unfold! 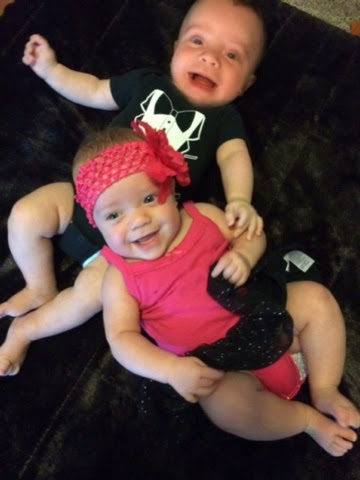 This picture of the twins was selected to participate in the Parents magazine photo contest. Please vote for the twins to help us win the weekly contest. This would make them a finalist for a chance to be on the cover and win $10k, which would help us immensely! You can vote once a day, so please do so if you can!! Just click on the link to vote and please forward to anyone you can think of that would vote for them. Thank you for your support!! <3 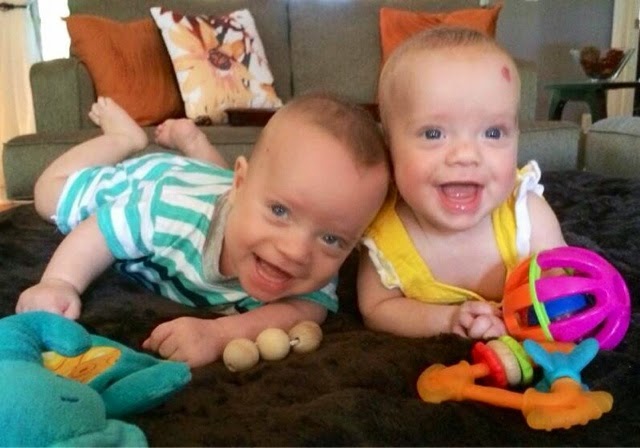