The Twins' "My Gym" Experience

I'm always actively searching for fun things to do with the twins. Unfortunately, a lot of the classes out there are pretty pricey when it comes to having two babies enrolled. Luckily, a lot of these places offer free one time trial classes so I have definitely been taking advantage of that! So far, a place called "My Gym" has been the best. It was a REALLY cool experience for the babies. They had some pretty amazing equipment there and some things I could never have even imagined! (Like a zipline that sends the babies zipping across the room!). Pop-Pop came out to visit so he could come with us and help out since it's hard to do things like that when I'm by myself. Good times were had by all!

I am SO happy with the way this month's photo turned out. I went with a Fall theme (my favorite time of year... which makes me really miss living up north with all the beautiful changing leaves!) and the twins had a blast playing with the leaves and little pumpkins. 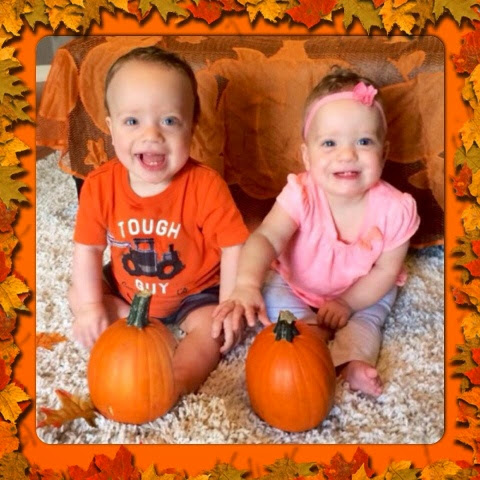 To see the photo shoot in action click here.
No comments:

Well, this started out as the 10 months update, but as the twins have steadily become more active I have less and less time to work on things like this. So, since we're now hitting the 11 month mark I figured I might as well combine the two.

I've had several moms tell me that from this point on the twins will progress exponentially faster, which is what they experienced when their babies were around this age. And boy did they hit the nail right on the head. It seems as though the twins are growing so fast and always doing something new! It has been such a joy watching them grow and change with each passing day. And while it's wonderful and exciting to see, it's also a reminder of how quickly time flies and just how precious every moment is. We truly treasure each second we have with them.

These past two months we have watched the twins' personalities continue to unfold and shine brighter than ever (which I'm sure will happen a little every month for years to come, but it's still fascinating to witness!). They are getting so big, especially River. He is looking more like a little boy and less like a baby lately.

So let's start with him. Our sensitive, lovey little guy now weighing 20 pounds! About a month ago G and I were talking about how it seems like he's become quite fussy lately, but when we stumbled across old videos from when we first brought them home we quickly realized that he's always been this way! And, in fact, it reminded us of how he was even like that in the NICU. When the nurses would change his diaper he'd get so worked up his face would get beet red and his heart rate would shoot up and set off alarms on his monitor! So now we realize it's just his personality. He can be the happiest smiley baby with an infectious belly laugh who loves to hug, but the second he's uncomfortable, tired or hungry he will most certainly express his displeasure!

To see Riv have a meltdown over dropping his cup click here.

As you know, he has had bad reflux issues for pretty much his whole life thus far. After lots of testing and specialists the bottom line was that he would "eventually grow out of it." But in the meantime he's suffered so much. We've tried 3 different medicines (which I'm not thrilled about) and none of them helped. Formula still poured out of him, sometimes hours after his bottle. The pediatrician finally gave us the go ahead to get off Neosure and on whatever other formula we choose. We're keeping Riley on it since she does fine with it and we still have a lot of cans left over, but last month I switched River to Similac Sensitive and I'm happy to report that it's made a world of difference! No more spitting up!! I did do a little test where I didn't give him his meds for a day on the new formula to see if he wouldn't need it, but unfortunately he started spitting up again so it looks like it's the combination of meds and special formula that is doing the trick. I'm so thrilled for him to not have to suffer any longer. Since then, he's been able to be on his tummy for longer periods of time so that's a bonus! However, he is still not crawling, or attempting to for that matter. Our pediatrician assured us that some babies just like being on their backs more because they have more range of motion with their arms and legs and according to the Physical Therapist and Development Specialist he's being (for lack of a better word) lazy. He prefers to lay back and relax as opposed to his sister who is Go Go Go (like her Mommy! LOL). However, as of this last week he's been rotating to reach for toys while on his belly which is at least a step in the right direction. We will continue working with him and pushing him to get his butt moving!

He is doing much better with sitting up now. He stays sitting up for extended periods of time without intentionally throwing himself back like he was doing to try and lay back down. So it's definitely progress! 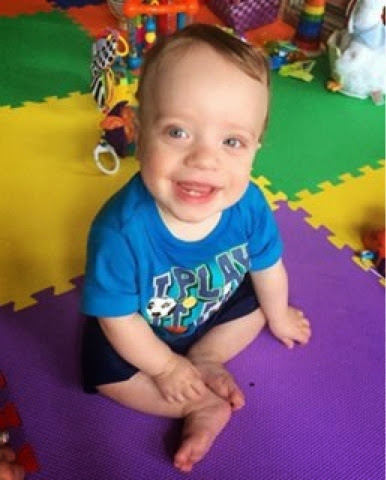 What he DOES like to do is stand up! We discovered a few weeks ago that he enjoys being up on his feet so we hold him up a little each day. As a result, his legs are getting stronger each day and now he can stand straight up with us only lightly holding his hands! At first we started with him holding on to something in front of him (like a chair or ottoman). Now that we have the pull-up bar we've been working with him to pull himself up and he's picking it up at lightening speed! He loves it so much, we literally have to pry his fingers off the bar when it's time to stop. At this rate he'll be walking before he ever crawls!

Click here to see Riv pull himself up on the bar.

One thing is for sure, the kid will steal your heart with one flash of his smile. It doesn't take much to get him to giggle, and his gut laugh is absolutely infectious!

He's definitely had a rough month though. He was sick with an upper respiratory infection AND cut THREE more teeth! He was sick for about a week, and although he remained in good spirits he had a nasty cough that kept him up at night. Plus mouth has to be killing him with all those teeth coming in. His second bottom one popped up followed by one top front and then the other. His poor gums are so swollen. I can't believe he's going to have four teeth soon. He's growing up too fast! 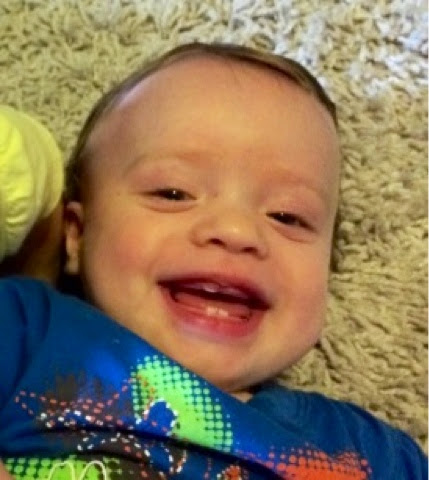 On to Miss Riley Jeanne. This girl is something else! Looking at her you can clearly see her gears are always turning. It's like on some level she's analyzing everything going on around her. Any little sound in the house and she's quickly looking in that direction with a quizzical look on her face trying to figure out what it was. She is definitely a curious one and now that she's on the move she tries to get into EVERYTHING. 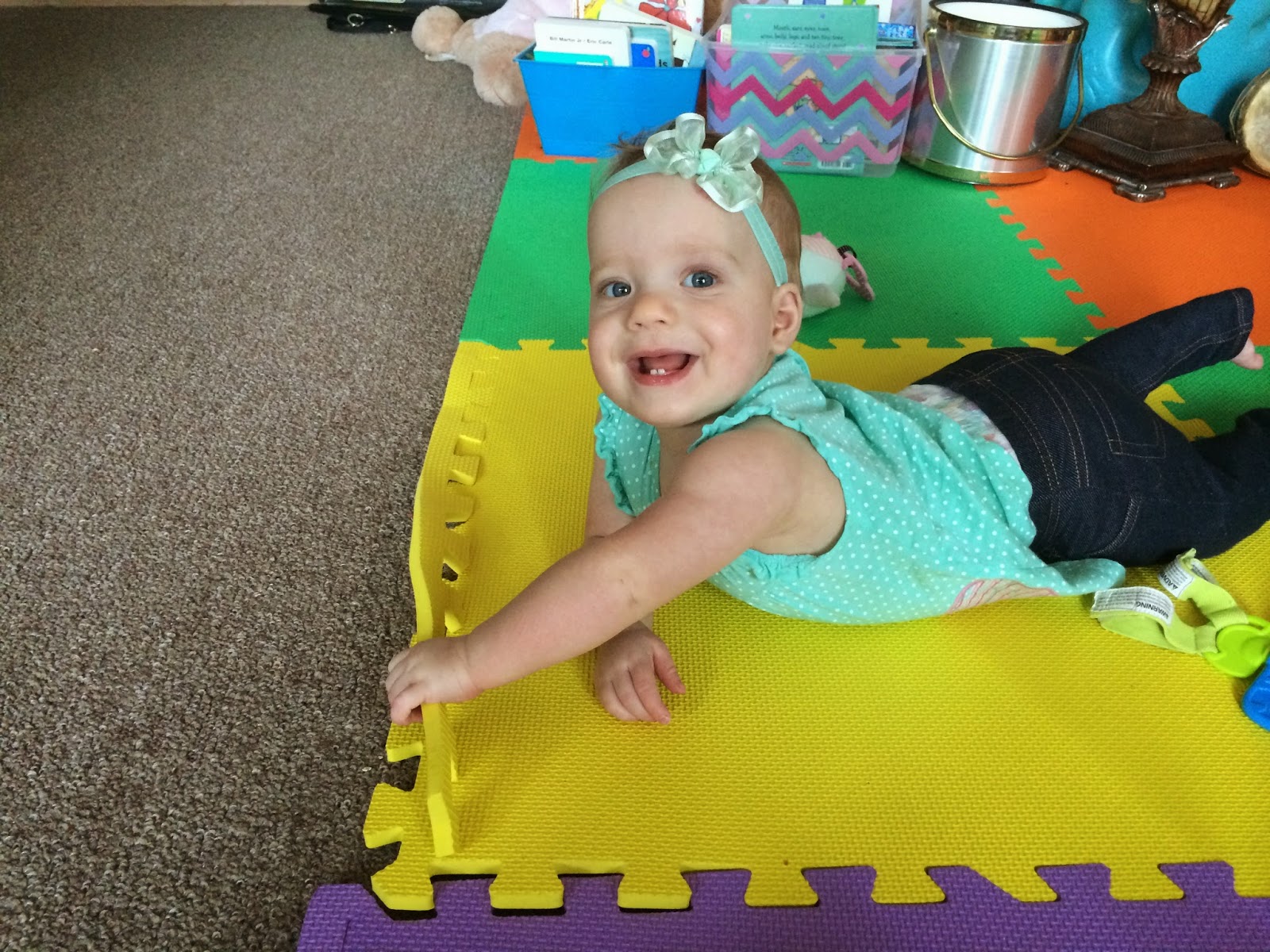 While she isn't crawling on all fours just yet, she has mastered her army crawl where she drags her (sometimes crossed!) legs and predominately uses her arms to pull herself around. And quickly at that! She goes from thing to thing and seems to enjoy her travel time the most.

Another thing she has been doing lately is dancing. (Again, just like her Mommy!). As soon as she hears music, whether it's a song on the radio or even someone humming a tune, she starts rocking side to side in time with the music. It's the cutest thing ever! She lights up like a Christmas Tree any time she hears music. We'll definitely have to put her in some music classes before long!

To see Riley dancing to her favorite song click here.

I've mentioned before her love for books, and that love keeps on growing! If I grab a book and hold it up to show her she perks right up, pushes up on her hands, gets a huge smile on her face and sometimes even lets out a yelp. It's truly amazing! She is very interactive with the books by touching the pages, making noises and loves the kind where you can lift different flaps. She can do that very well. It's wonderful to see her early literacy skills develop and I will be sure to foster that in the upcoming months and years.

To watch how excited Riley gets during story time click here.


With the combination of her feisty personality and immense curiosity, I have a feeling our sweet girl is going to be keeping us on our toes! 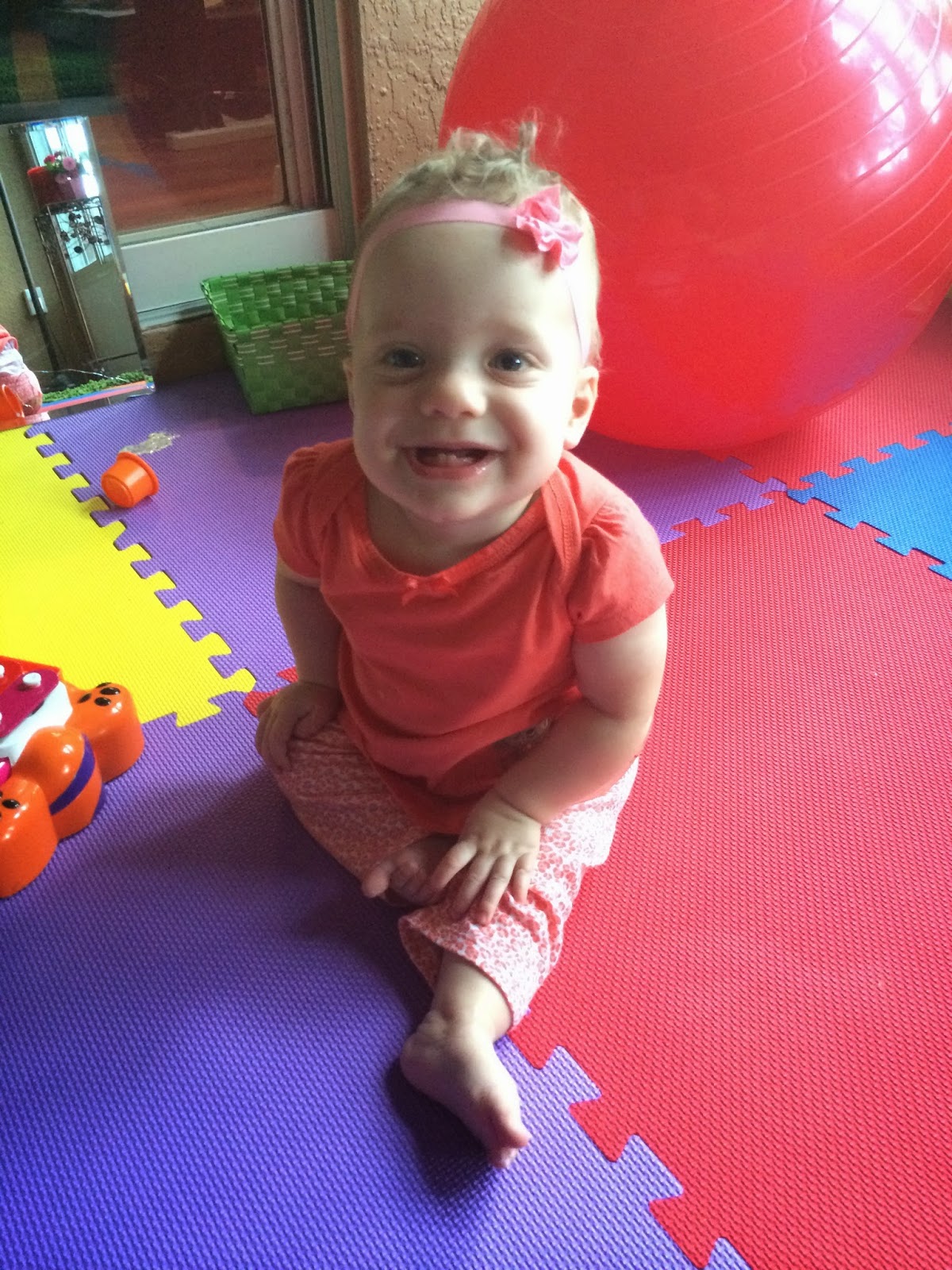 In other news, they are both still sleeping soundly through the night (from about 7:30p-7:30a) which is great for us, however, it would be even better if we would actually go to bed early and get the much-needed sleep we need! But since it's the only time G and I get together, we tend to stay up later than we should.

The twins are now both drinking from trainer cups which means they are done with bottles! 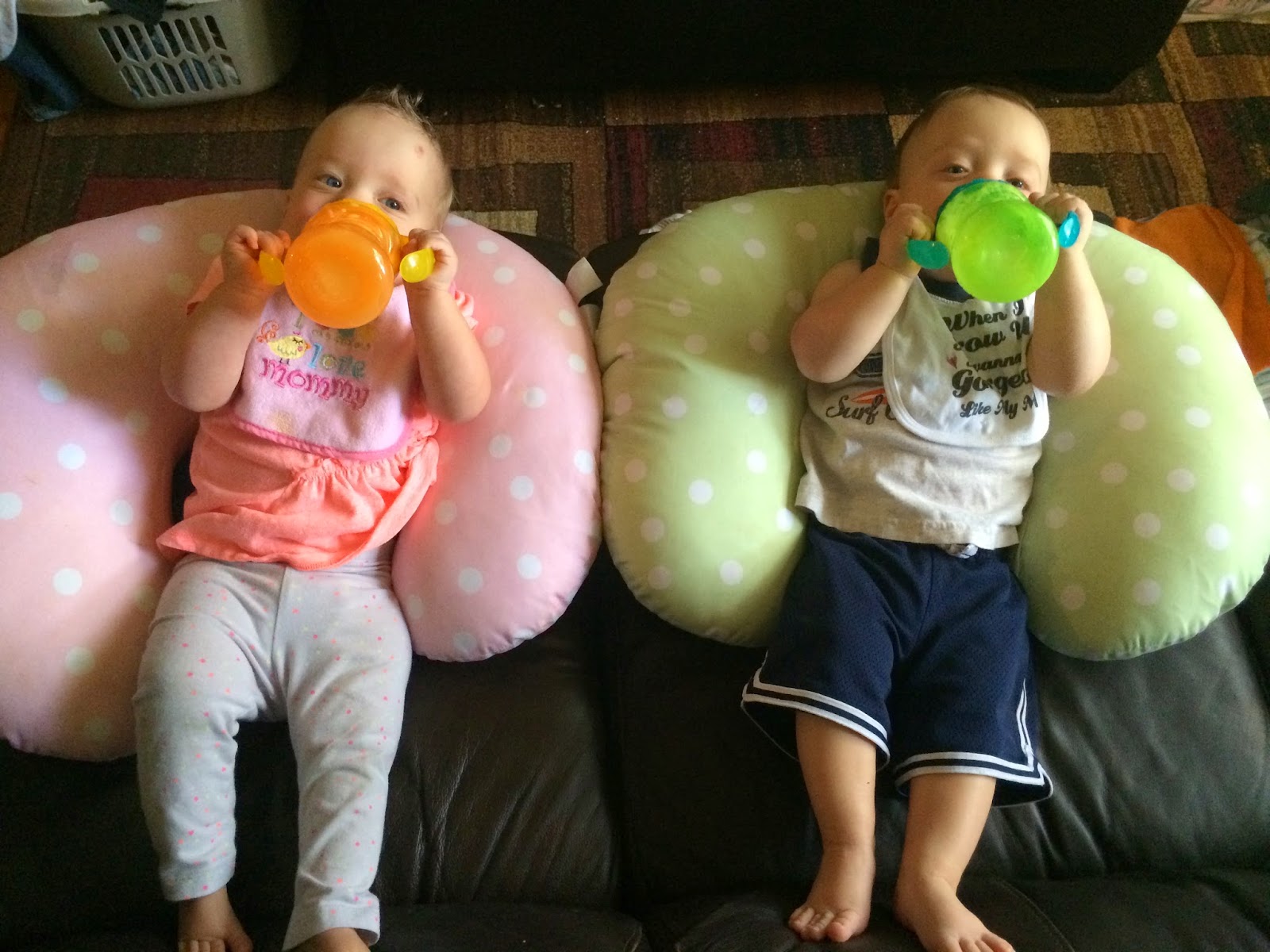 It is a bittersweet feeling. We are happy to see them learning new skills but it is one step closer to them moving away from being a baby and on to being a toddler. Not that it's a bad thing... G and I are just missing the days when they were only a few pounds and would sleep curled up on us for hours. <3

I've been continuing to work with them on drinking from a glass. I'm still using shot glasses since their hands are small. They get to practice a few times a day with water. 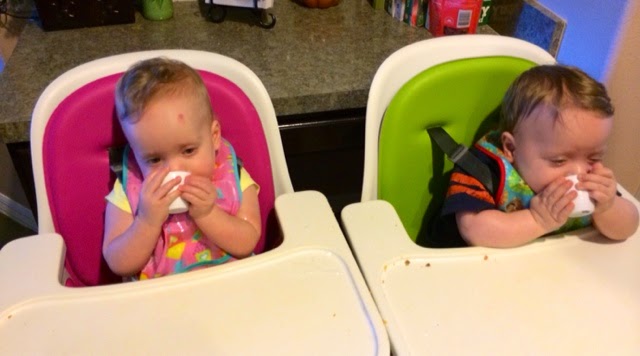 On top of that, they have also learned how to drink from a straw! I sometimes give them their water in their straw cups to mix things up... 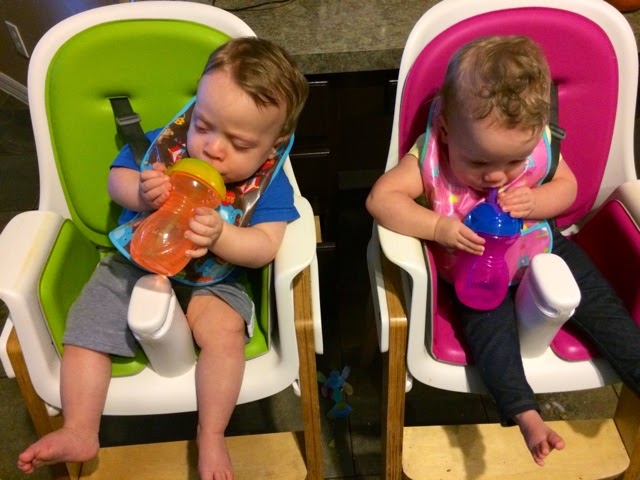 Snapped a pic of Riley drinking out of Daddy's water bottle. She was sitting on his lap and just grabbed the straw and helped herself to a few sips. She's something else! 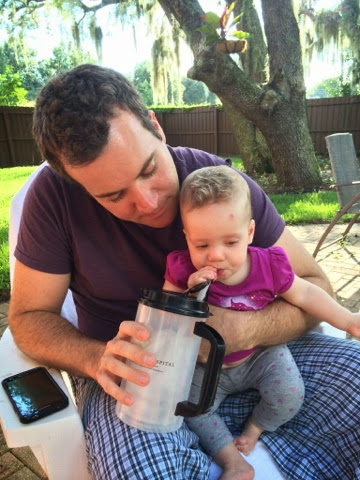 They have been interacting a lot more lately, too. It's obvious they are comfortable with each other with Riley climbing over River always curiously playing with his ear and both of them drape their legs over the other as if they were lounging on a piece of furniture. Riley thinks her brother is hilarious. He can just flap a toy around and she will stare at him all wide eyed and giggle. They absolutely have a connection. It is awesome to watch and I know it will get even more fun as they get older. 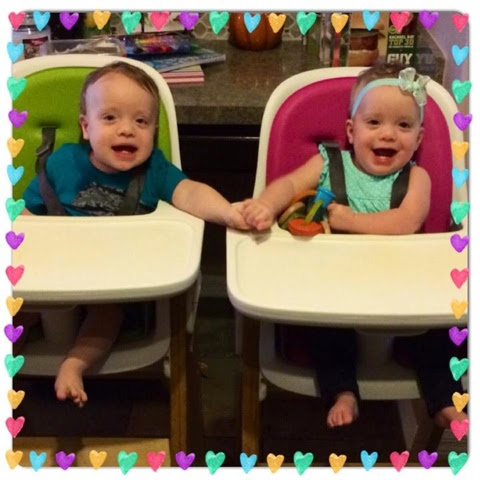 The next post they will be ONE YEAR. I can't believe it!