Tales from the Crypt

Ok so this is so the teacher in me coming out, but as I was reading the twins a book of old-school nursery rhymes I came to the disturbing realization that there were some sick people writing these! Maybe it was a sign of the times or something, but all the rhymes are chock full of violence and/or bad parenting!: throwing an old man down the stairs, a baby falling out of a tree, kids falling down a hill and a mom who whips her kids before bed! How on earth would you explain these to young children who are learning language and meaning!? LOL Then there is "Hey Diddle Diddle," which clearly the writer was on an acid trip!
And I love how they are all surrounded by cute pictures.... Craziness! 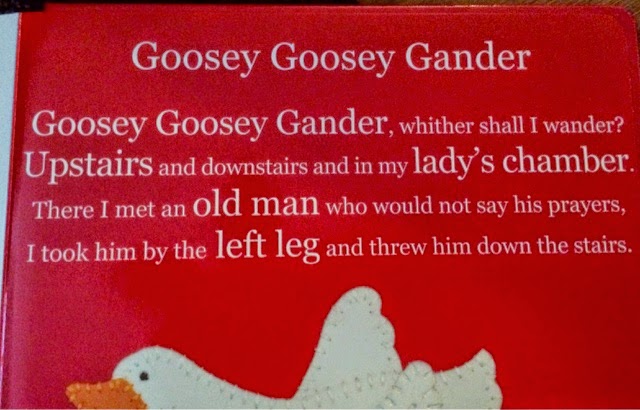 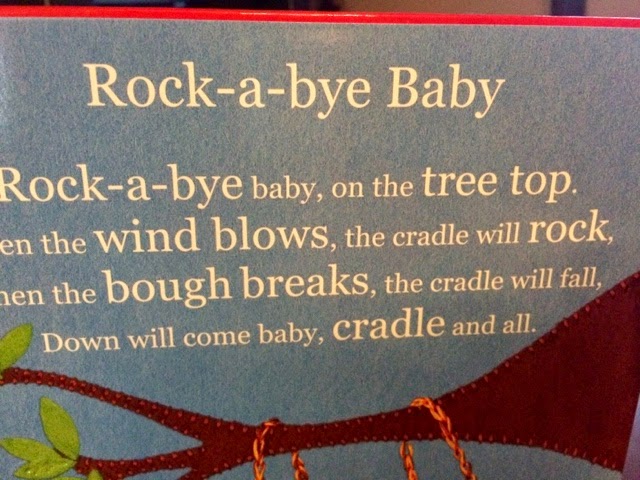 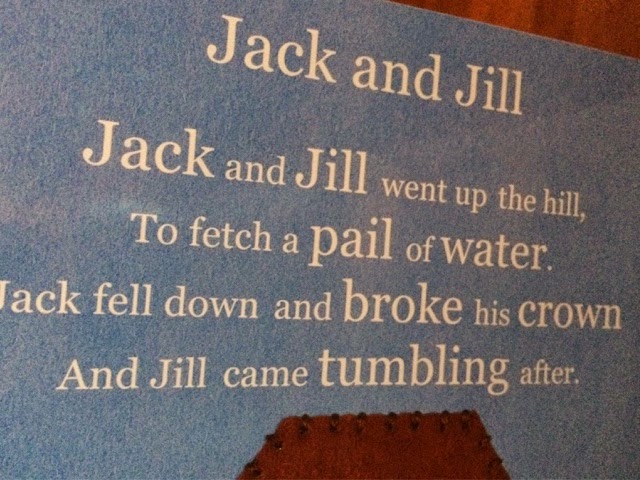 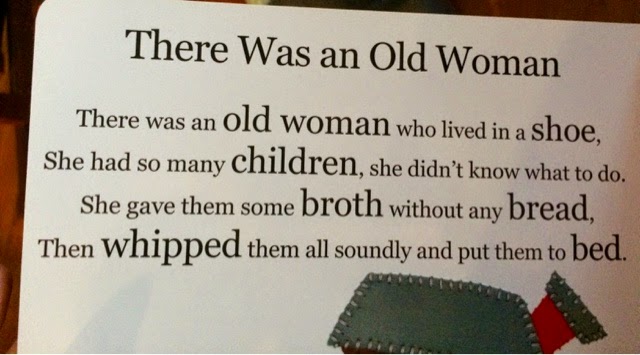 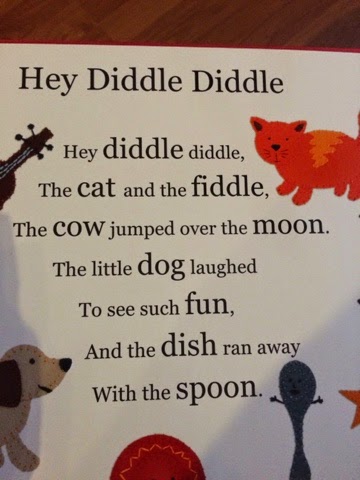 Thanks to my parents for getting us Disney passes for Christmas this year we've been able to take the twins to different theme parks on the weekends. Before having kids, I always thought the idea of taking a one year old to a theme park was pointless, but seeing the magic through their eyes has definitely changed my tune. While they won't remember any of it being that they are so young, they are certainly experiencing some pretty spectacular things and enjoying what they see. All those experiences are firing up those synapses in their brains, which is reason enough for me to keep taking them! We can only last about 4 hours or so at the parks before we get in the "red zone" and head home before the meltdowns begin. This is why the passes are great! We don't feel bad only going for a few hours and can always come back the following weekend!

Our most recent adventure was to Animal Kingdom. The twins had a fantastic time, but even more so G and I were elated to watch their excitement. We did one section of the park (Africa) where we went on a 22-minute Safari ride in a giant jeep, saw lots of animals and watched a great musical!

Riley was so enthralled with all the animals and it was too cute, she would point at every one of them and say, "ooooh!" LOL. The show we saw was "Festival of the Lion King" and it was quite the production (think Broadway meets Cirque Du Soleil with Lion King characters). River & Riley really surprised us by not only sitting through the half-hour musical on our laps, they were dancing and clapping their hands through the whole thing! Riv, being the ham that he is, found that the lady next to him was getting a kick out of how he was clapping so about a dozen times he would reach over, tap her, and start clapping with a huge grin on his face! He sure loves attention!

We had a fabulous day and made some great memories. Can't wait 'til our next Disney adventure. These two are a riot!

Riley was pointing at all the animals 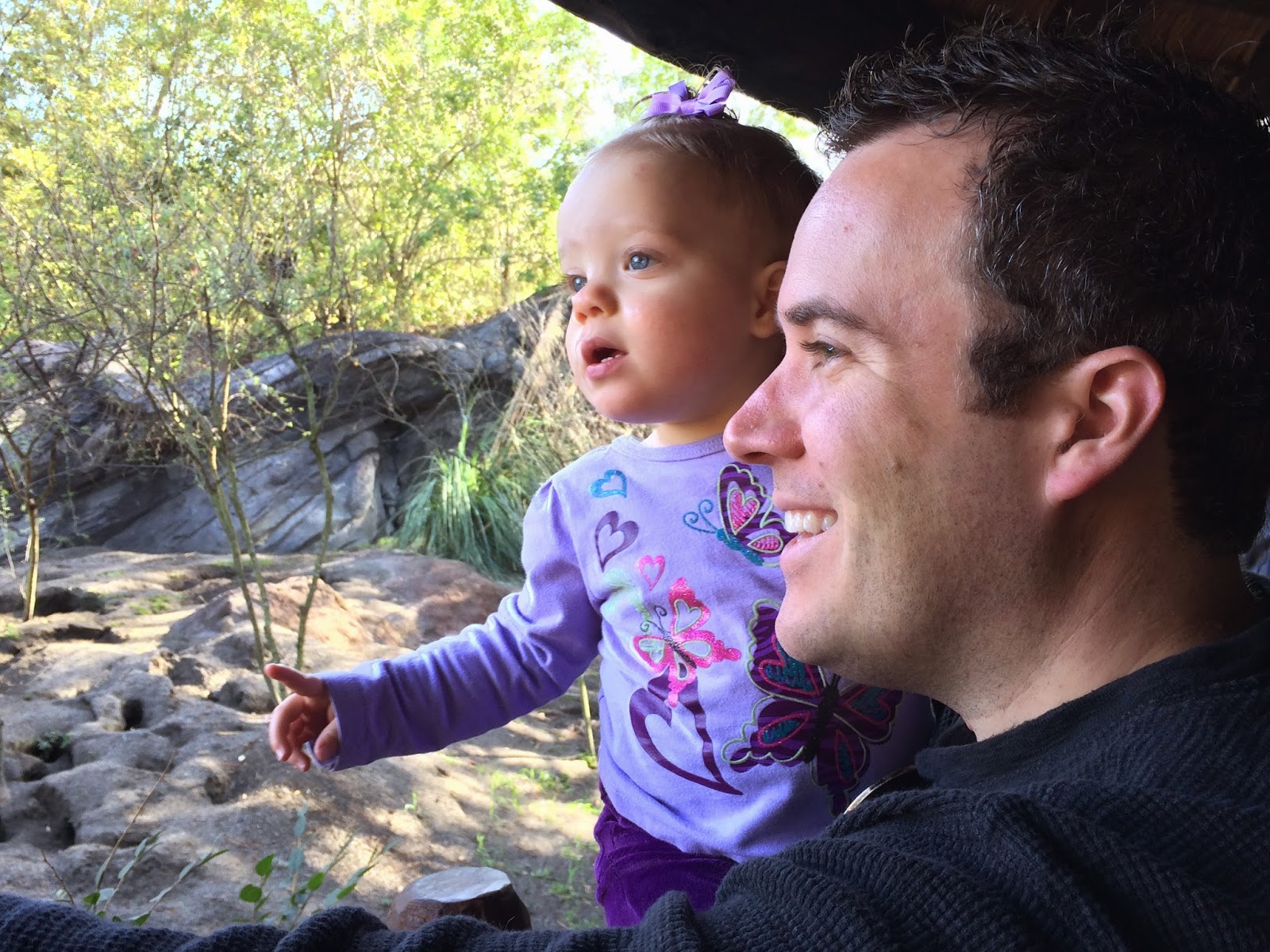 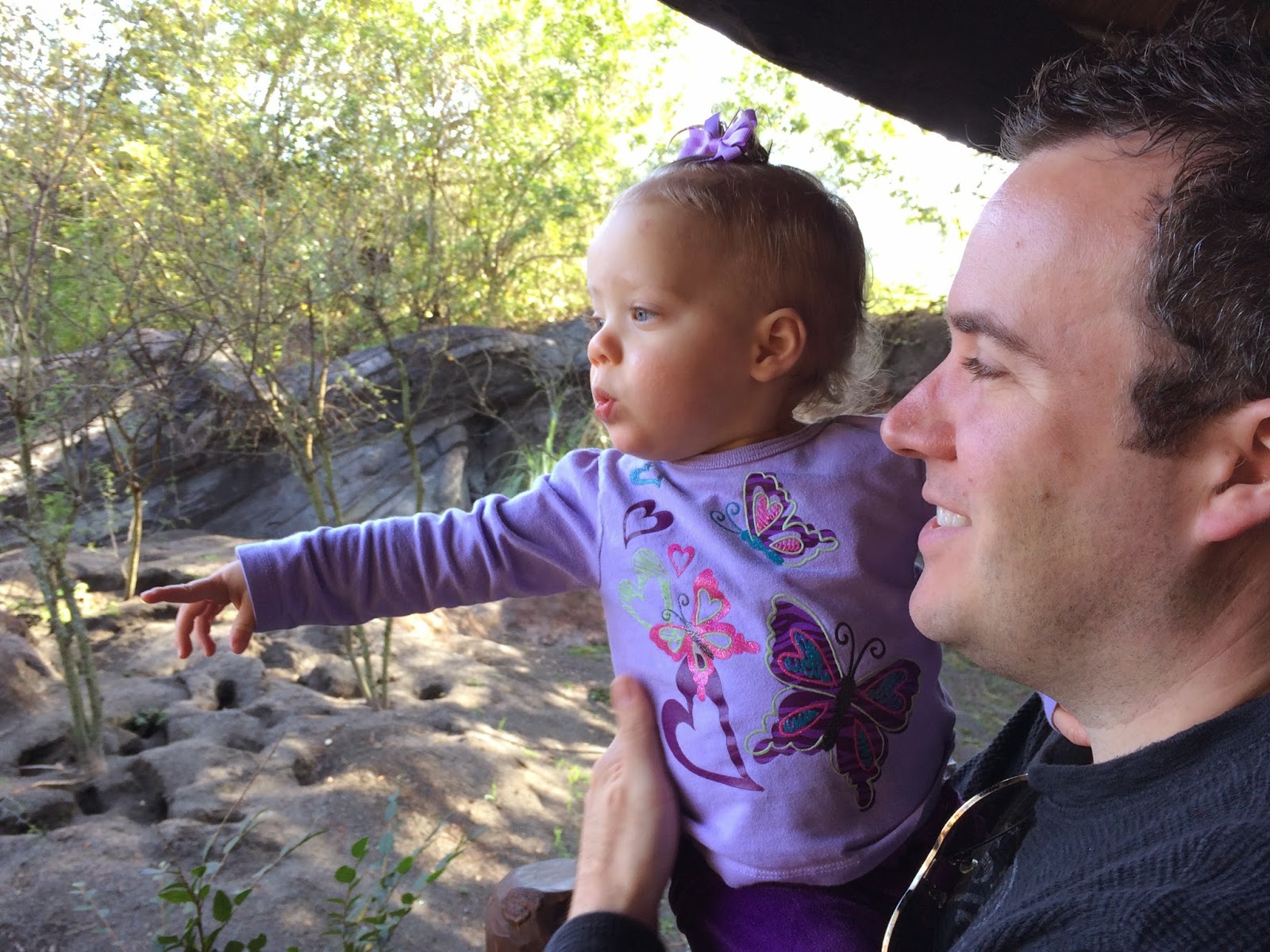 So fascinated on the Safari 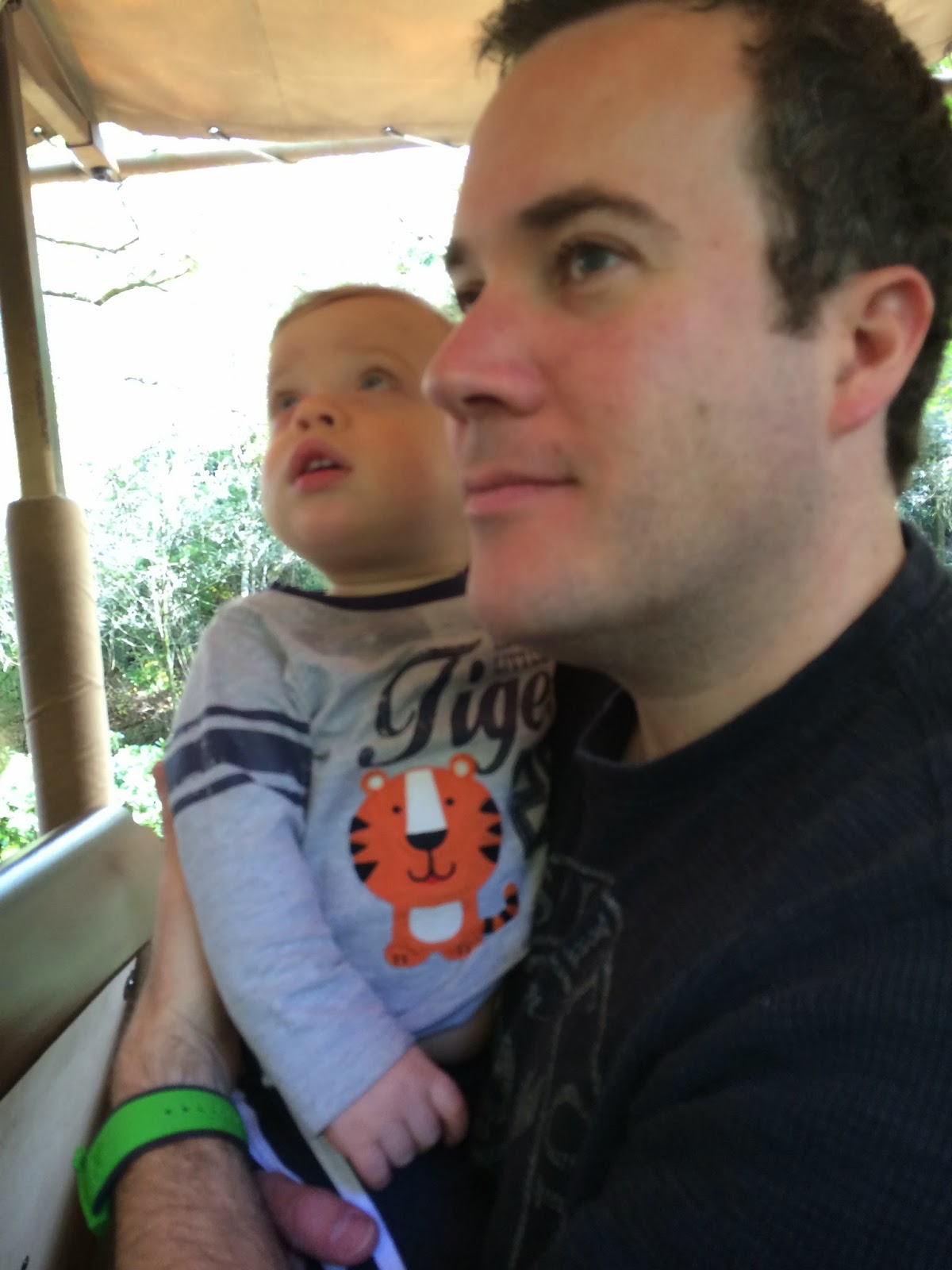 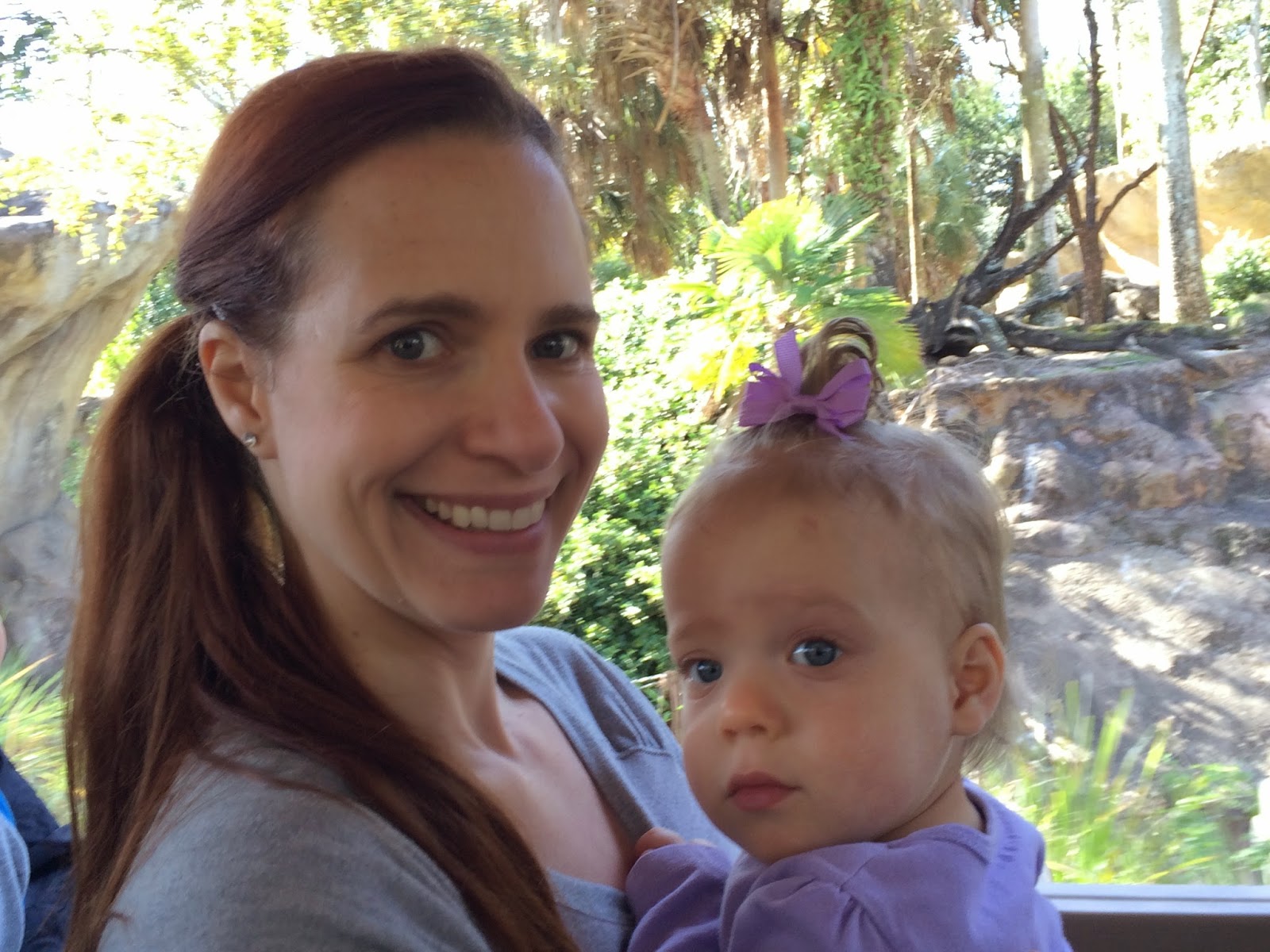 Riv zonked out in daddy's arms 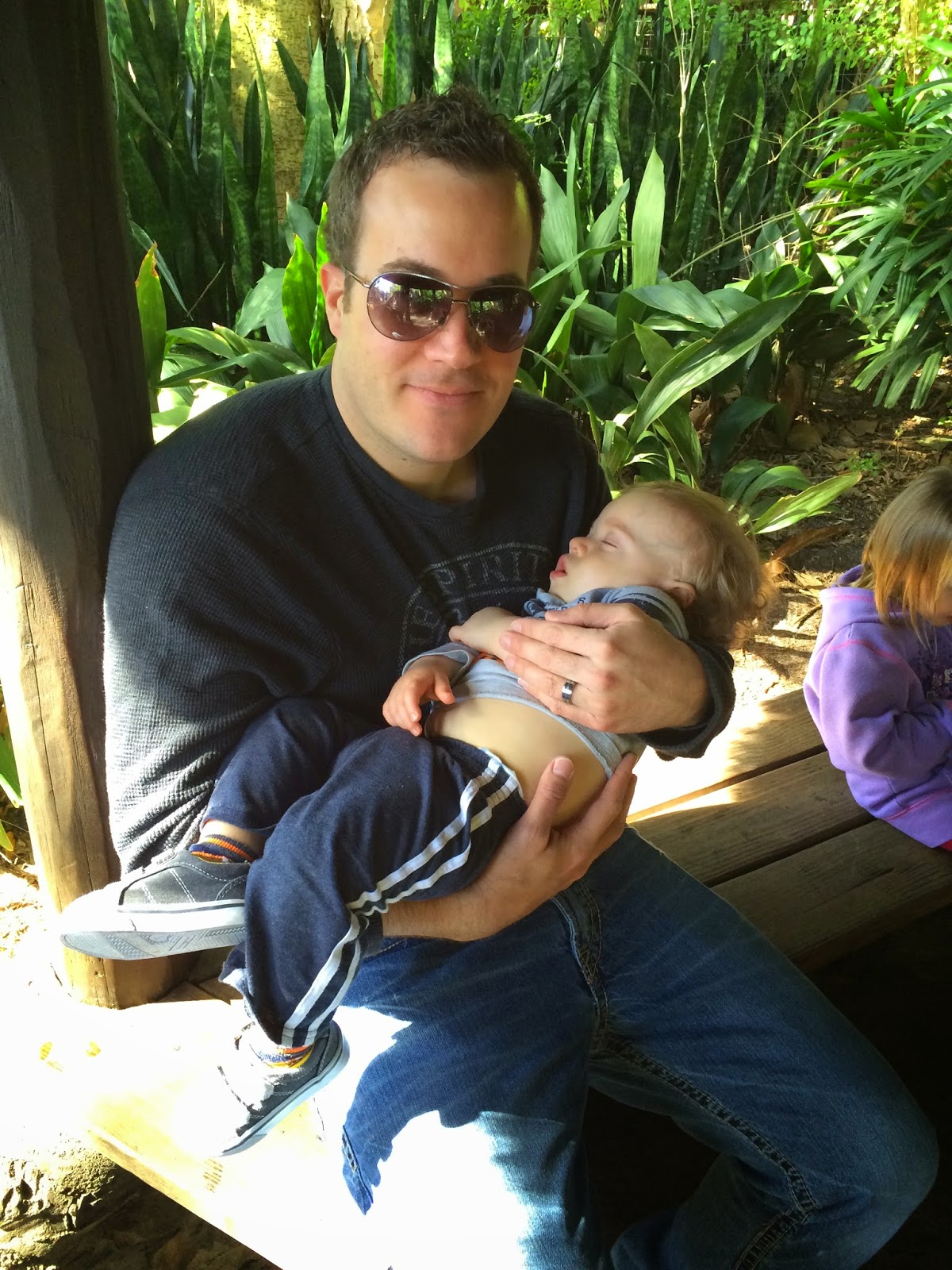 Petting a stuffed bear (that they thought was real!) 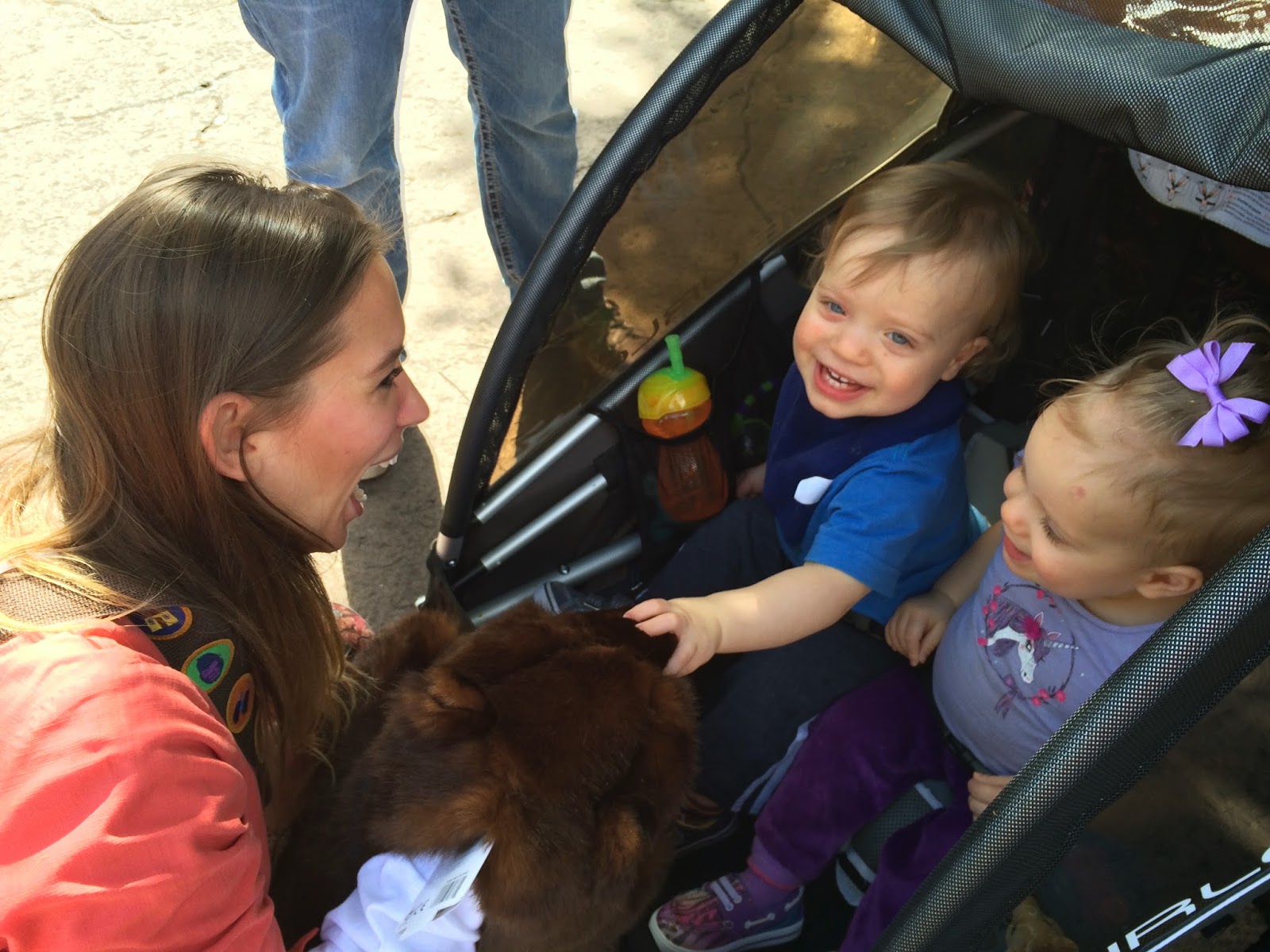 Happy New Year! I can't believe it's 2015. I remember back in 2008 when I had renewed my license the expiration date was 2016 and I thought that seemed light years away. Now it's next year! Unreal. This year I have lots of resolutions, all centering around becoming more "enlightened." That includes doing more yoga and meditation (G and I have been doing some guided meditation together- using the Yogaglo website- at night once the twins are in bed and it really does wonders for us!), and reading some Deepak Chopra/Dhali Lama books. We both feel that by continually working on being the best versions of ourselves it will carry over to the twins since modeling behavior has the most long-term effects. I've also been on a purging and renewal kick, gutting out all cabinets, drawers and closets to reorganize and start fresh. And I must say, it feels good to get organized!

This new year also brought some major changes for the twins. They have suddenly gone from babies to toddlers right before our eyes! How this happened so suddenly I have no idea, but I certainly never got the memo! And while this change comes with new and exciting developments, it is also exponentially more challenging. On one hand they have become so much more aware and are doing a lot more. For one, they are both on their way to walking. In just two short weeks of working with them on taking their first wobbly steps holding on to their walker wagon they were up and pushing it around like little pros! It's pretty amazing. I do feel Riv is going to walk first and Riley will talk first. He can do laps around the house pretty quickly while Riley can only go a much shorter distance before getting wobbly and sitting down. Lately they've been taking turns where one gets in the wagon the other pushes. It is SO cute! They love being on their feet more than anything, and they can now pull up to stand with the greatest of ease on anything, including walls, and hang on to things with just one finger. They have the strength, all that is left is the balance. But they are both on their way! And believe me, I'm in no hurry. These two already get into EVERYTHING and they are only crawling! Their favorite thing these days is to go from room to room opening cabinets and emptying them out - especially Riley- but only the safe ones...  any cabinets with hazardous materials have child locks on them. It leaves Mommy in a constant state of clean up! We recently added a few more locks just to cut down on the mess.

As for saying Riley will most likely talk first, she is just more vocal. They both say Mommy/Mom/Mama and Daddy/Dad/Dada (they use all the variations at different times). The only other thing Riv really says is "nah nah nah nah nah" when he's not happy with something. It's definitely his way of showing disapproval. Riley, however, has a few more words in her vocabulary. Her current favorite being "uh-oh," which she does on cue when she or someone else drops something. She also says, "baby" which makes sense because I always say things like, "I love you babies" and refer to them as such when addressing them both.

It's amazing how they pick up on the things we say! She also says River, but it comes out as "Ribba" or "bubbo" which we think is her way of saying brother. She says "ball" and still randomly repeats words we say, but usually only once and it's sporadic. She has been doing this new babbling thing with her tongue and is pronouncing more sounds and syllables each day! We recently got a cute little fake phone toy from a friend and Riley can't get enough of it. We hold it to our ear and say, "hello," pretending to talk on it and now she's been holding it up to our ear and even says "hello" sometimes! While Riv isn't saying any other words, he gets on a babbling kick and will have a whole conversation where I'm sure he thinks he's talking. It's too cute!

When it comes to receptive language, they are both understanding more each day. When we say "up" they lift their arms to be picked up. When we ask if they want to go outside, they rush to the back door. If we mention their wagon, they immediately crawl over and start walking with it. They also understand and respond to "eat," "milk," "hug," "book," and "bath." (And boy do they LOVE bath time!- more on that later). They certainly know Mommy and Daddy and one another. If we ask where one of us is, they look right at them or crawl over to them. They understand when the door chime sounds that someone will be coming in from the garage. When Daddy gets home from work they excitedly race out of the playroom looking for him. If we ask them to hand us something, they do. When they are playing with a shape sorter if I point to the spot a specific shape goes in they drop it in that hole. It's pretty mind-blowing how much they understand and that knowledge base continues to grow every day!

They are both continually improving their fine-motor skills. Particularly River. He just adores putting things into other things. (Or as my dad says, "he likes the guzzintas." - this goes into that, that goes into this). LOL. Unfortunately for Riv, his sister is the opposite. She prefers taking things apart and knocking things down. So every time he tries to work on something she goes rushing over to mess it up! At this rate he'll never get anything done! They both really enjoy playing with shape sorters, although River has a little more patience with it. He can do pretty much ALL the shapes now!

I've been working on colors and shapes with them. While they are still a bit young, it definitely doesn't hurt to expose them to the concepts. I made a color-matching game using paint swatches that I laminated and have permanently up on one of the glass doors in their playroom. This way we can play with it at anytime and it will still be there as they grow. 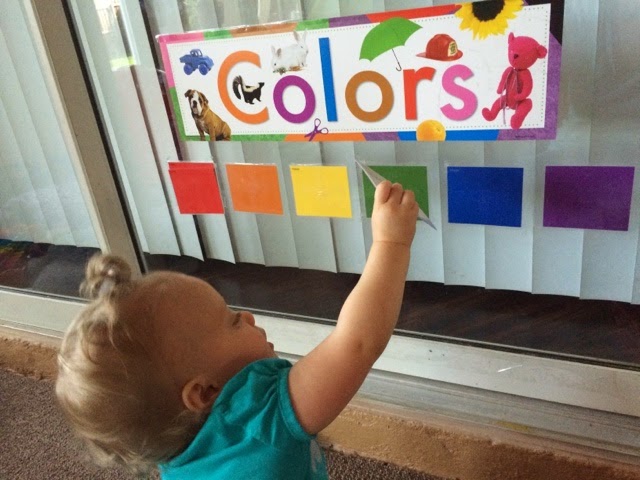 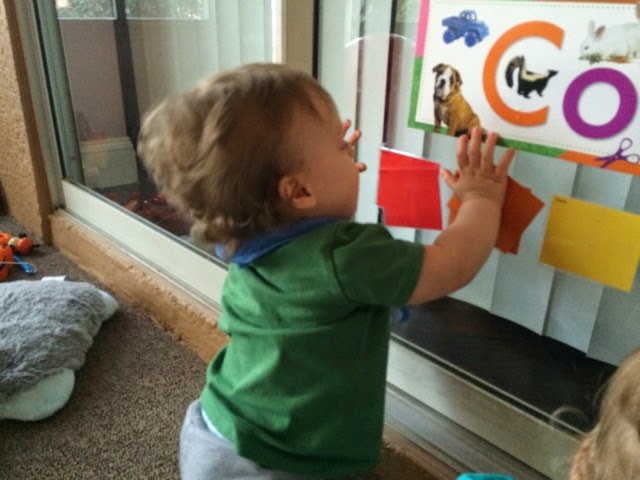 So, back to bath time. Nothing brings these two more joy than being in the bath tub. They splash & play, stand up, crawl through the water, yell and laugh their heads off. It's such a delight to see!

As for Mommy and Daddy, G and I are doing great. We are loving this adventure. I wish we could just be independently wealthy so G didn't have to work. His presence is definitely missed while he's gone and the twins are at their happiest when we're all together. <3

That's all for now. Until next time! 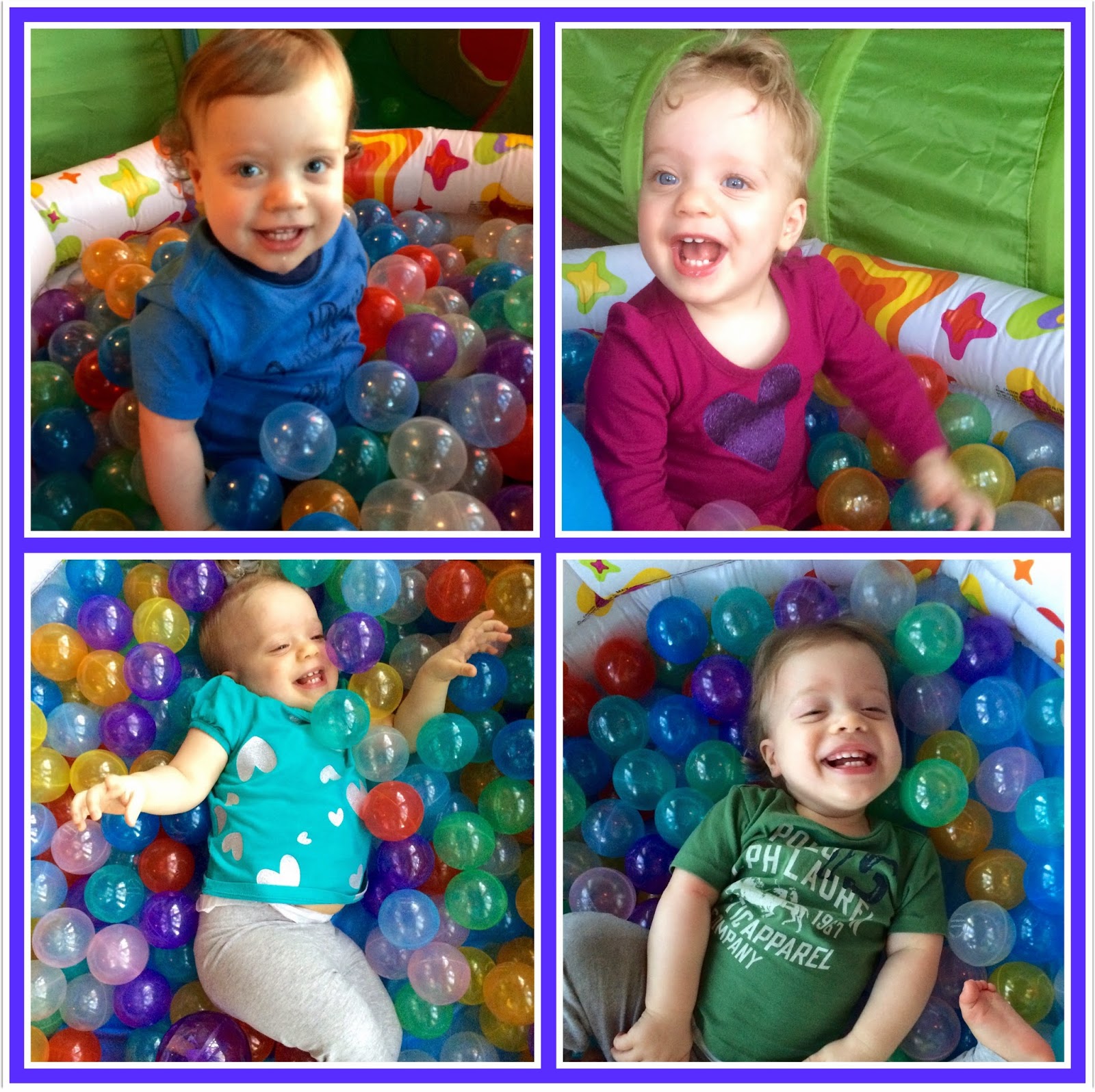 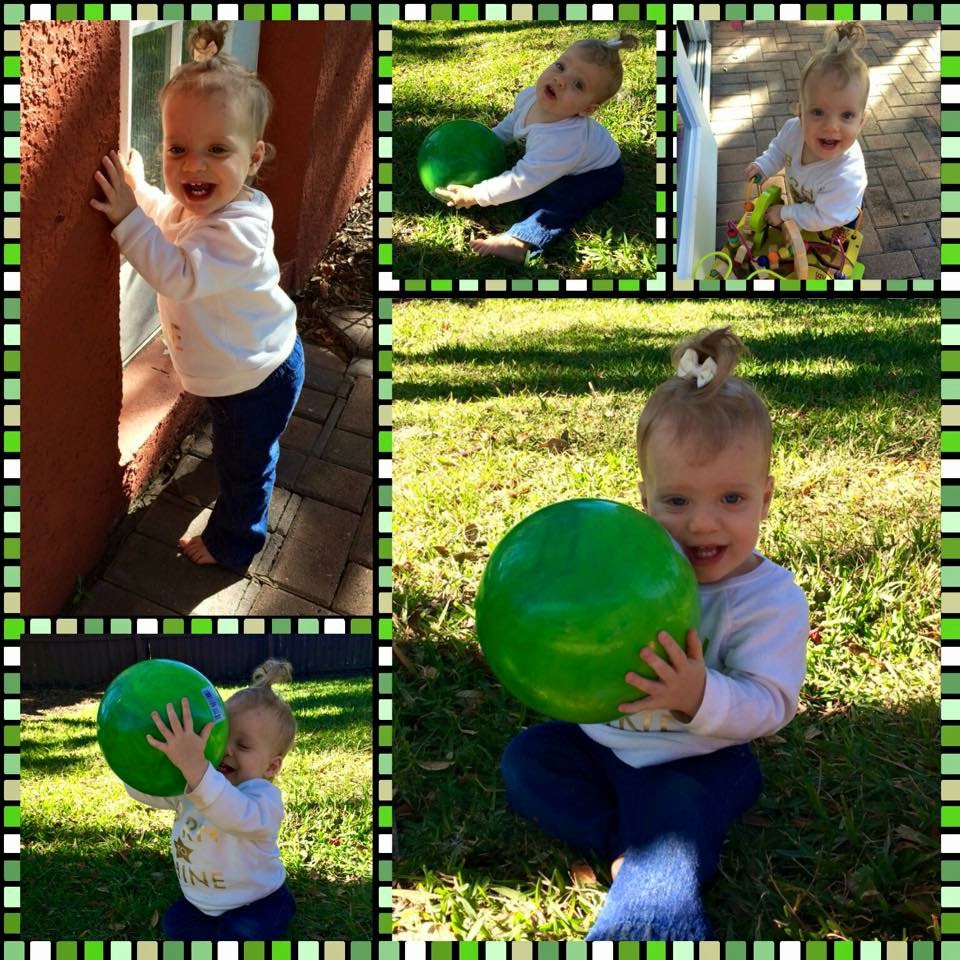 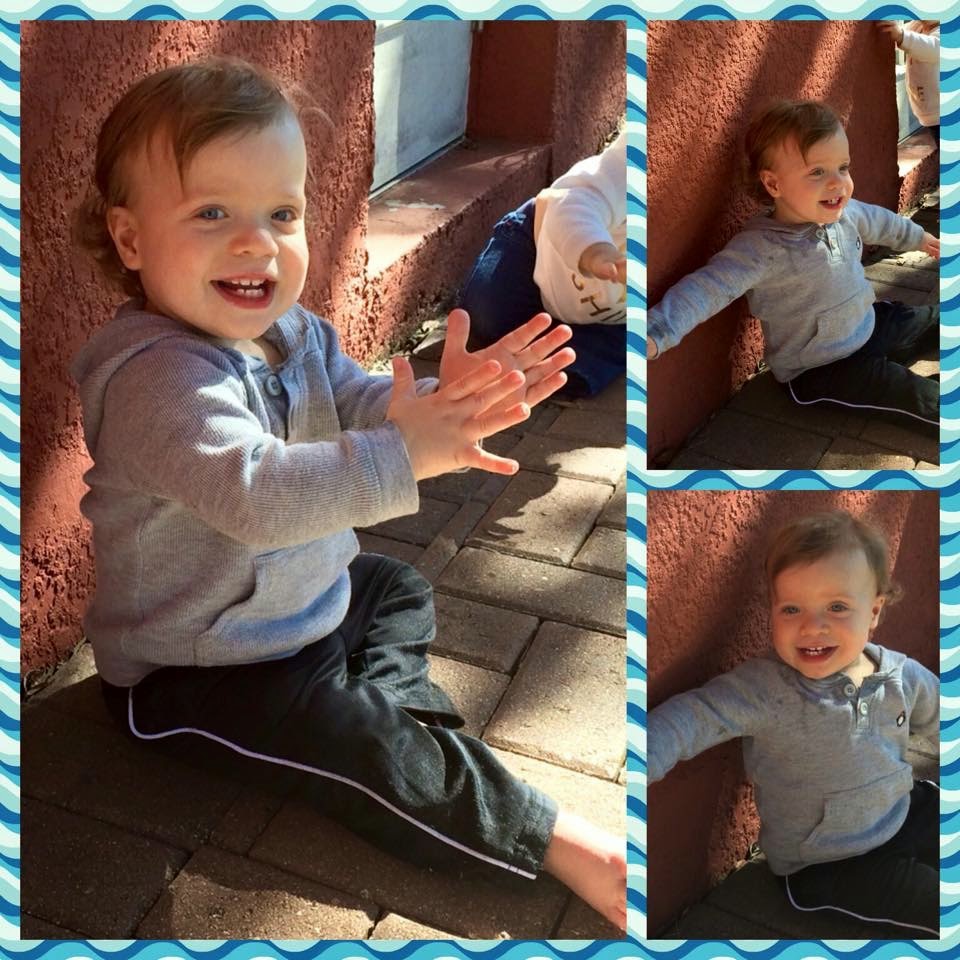