It has been a eventful month of eating for River and Riley! Ever since the pediatrician gave the go ahead to start feeding them three squares a day plus a snack (followed by a bottle), I have been on a mission to tantalize the twins taste buds. As mentioned in previous posts, we are doing a mix of Baby Led Weaning and following some suggestions from the Canadian Pediatric Society; (here is a link if you're interested: http://www.hc-sc.gc.ca/fn-an/nutrition/infant-nourisson/recom/recom-6-24-months-6-24-mois-eng.php)

And it's not because my hubby is a dual citizen, I just really liked the fact that their guidelines are research based and very up-to-date. It also falls in line with Baby Led Weaning with recommending starting babies with textured foods instead of purees and jumping right into the high-allergen foods early on (except for peanuts). So we did just that... jumped right in. Much to my surprise it is working marvelously. The babies have seemed to like everything I've made for them! It would appear Riv likes meat more than Riley (we've been curious as to what their food preferences would be since G is a carnivore and I've been a veg-head for life!). River always goes straight for the chicken/beef/fish etc. right off the bat and Riley grabs veggies/fruit/pasta first. And Riley, the little stinker, when she doesn't want something on her tray she will grab it, hold it over the side of the high chair and drop it on the floor. I've also caught her putting it on her brother's tray! She's a sneaky girl, that one. LOL

I try to make meals that I can portion and freeze for future feedings. It is a new and foreign concept to me, but I have been hitting it hard and it really pays off. I now have a freezer full of options and I'm always trying to add to it. It's a lot of prep work I have to do when I'm lucky enough for the twins to take longer than a 15 minute nap, but it's so worth it for the convenience of only needing to heat up a ready-made meal. :-) I've also found a lot of baby/toddler finger food recipes that are chock full of shredded veggies, in pasta and even meatloaf balls! Yes. I said meatloaf balls.

I have kept track of everything the twins have tried this month and I am super proud of them that they have tried (and seem to like!) so many foods. Riley's favorites so far are watermelon, grapes and any kind of pasta. Riv doesn't seem to dig fruit that much, although he'll eat it for the most part and he really likes beef, cheese and omelets. Neither seem to keen on avocado (which seems crazy because I loooove it). It will be interesting to see if their tastes change as they get older and hopefully all this food sampling will lead to toddlers who aren't picky. We shall see! 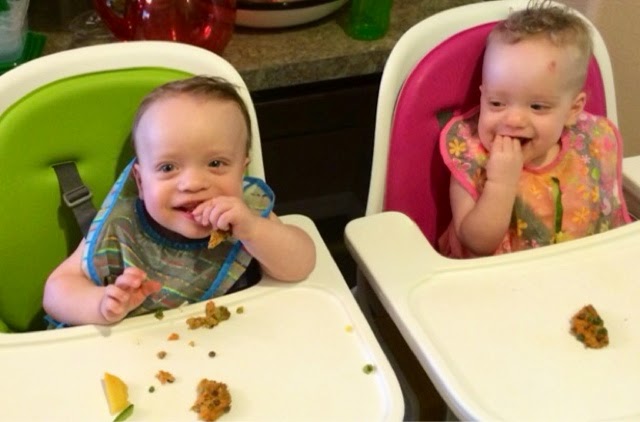 Here is a list of everything they have tried this month...


Looking forward to more adventures with food for the twins!

Cry Me a River

So there's this video app that makes a montage video each day of all the pictures and videos you take. (Awesome app!) So you have no idea what it's going to look like until it's done. This one inadvertently turned out hilarious! G and I watched it over and over laughing so hard we were crying! It chose a video G took of River crying during dinner one night (he didn't nap and was cranky- which is pretty much par for the course with Riv) and the app chose to put it to upbeat music, which makes it all the more hysterical.

While our daughters were playing yesterday, my friend and I saw this happening and wanted to see how it played out...

Riley is determined to steal her friend's pacifier for herself (even though she doesn't even use them!). It goes back and forth with them swiping it out of each other's mouths... At one point Riley growls at her, later followed by her friend getting frustrated, Riley tormenting her by hitting the pacifier on her leg before popping it back in her own mouth, and ultimately leads to her friend putting her foot down... literally! Which finally gets Riley to back off and leave her alone.

My daughter is a little trouble maker!
Oy vay!